The Phantom:
A Publishing History in the U.S.A.

by Bob and John Griffin 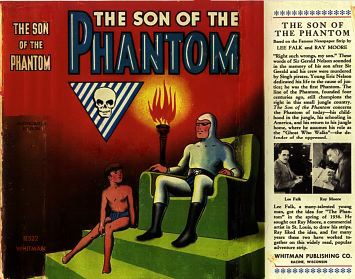 The only hardcover Phantom book (other than the Big Little Books) was published from 1944-1946 by the Whitman Publishing Co., titled The Son of the Phantom.

It was written by Dale Robertson and based on the original 1944/5 Sunday strip story by Lee Falk and Ray Moore - The Childhood of the Phantom. (The art was actually ghosted by Wilson McCoy since Ray Moore was in the air force at this time.) The story is about the current Phantom: his childhood in the jungle, his education in America, the death of his mother and his return to the Deep Woods, his father's death and his becoming the Phantom.

The book contained 256 pages including 20 panels from the original Sunday strip but the beginning of the Phantom's history was changed; the first Phantom was no longer Sir Christopher Standish but Eric Nelson, the son of Sir Gerald Nelson. Another change in the story occurs with the names of the Phantom's relatives in America: in the Sunday strip they are named Jasper and Lucy Gray; in the book they are Jasper and Lucy Walker.

There were three color variants of the cover of the book: brown, blue and green. The book was published with a colour dust jacket showing the 20th Phantom seated on the Skull Throne, with the young heir seated in front on him.

Return to the USA Publishing History