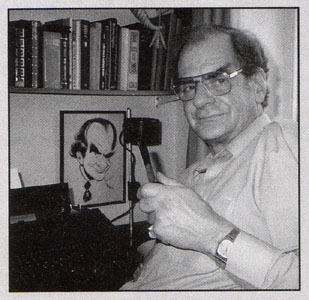 Donne Avenell was born 1925 in London, and aspired to become a writer from an early age. After finishing school he became assistant editor for the magazine Radio Fun published by Amalgamated Press, later IPC. After a period as telegraphist for the navy during World War II, he returned to Amalgamated, where he was editor of an architect magazine for six years. During that time he began to write radio plays and romantic short stories. He was very productive, and used several pseudonyms so it wouldn't look suspicious that all these stories were written by one person. Some of the names he used were Alec Ashton and Charles King.

In 1960, he became a full-time freelance writer for TV, newspapers and magazines. In the mid/late 1950s he had also begun to write comics for IPC's War Picture Library magazines and occasionally the newspaper strip Tiffany Jones. 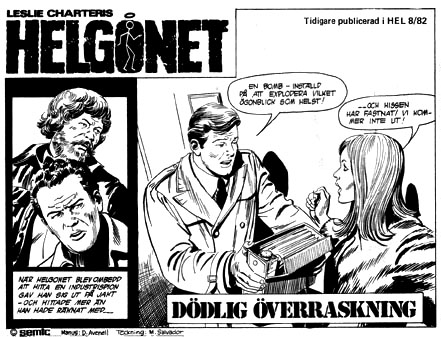 It was during his time at IPC that he got in touch with Norman Worker, who would later introduce him to Semic Press in Stockholm and their comic magazines Buffalo Bill and Helgonet (The Saint). Donne would eventually become the main writer for The Saint, which was based more on the very popular TV series starring Roger Moore than the original novels. The TV series was so popular in Sweden that it spawned a comic magazine (published from 1966 to 1985!) with exclusive stories. One wonders whether this popularity had anything to do with The Saint's car being a Volvo! Working on The Saint would prove to be very challenging at times, as the character's creator Leslie Charteries had to approve of every story synopsis. As Avenell recalled, "Charteris could sometimes let six or seven stories pass without comment, but then all of sudden for no apparent reason he would send an awful letter that would rip you to shreds." Although Charteris never seemed to get over the fact that writing a 22-page comic book story had more limitations than writing a book, he was apparently over all satisfied with Avenell's work. He even offered Donne the opportunity to ghost a Saint novel, but Donne first declined when he heard how much (or little) Charteris was willing to pay! He did however write two novels under his own name, in cooperation with Graham Weaver: The Saint and the Templar Treasure in 1979 and Count on The Saint in 1980.

In 1975, Donne co-wrote the comic strip Powerman with Norman Worker. The comic was produced in the UK but sold initially only in Nigeria! It was drawn by well-known artists Dave Gibbons (Watchmen) and Brian Bolland (Camelot 3000) early in their careers - in fact it was Bolland's first comics job ever. Some episodes were later reprinted in a 4-issue series by Eclipse/Acme Press in 1988 in the magazine Power Comics. The main character's name was changed to Powerbolt since Marvel comics now owned the rights to a comic character called PowerMan (aka Luke Cage). Note that in this reprint series, Donne's name was spelled "Don Avenall".

Donne Avenell joined the Team Fantomen ranks in 1978 at the age of 53, two years after his friend Norman Worker. Donne's first Phantom story was Dizzying Affairs (F159, Fantomen 20/1978, not published by Frew) with art by Özcan Eralp. Avenell had never read the Phantom strip before, but immediately became a fan favourite and has written several of the most popular Phantom stories over the years. The stand-out was of course The Story of Devil (F179, Fantomen 23/1979 and Frew #1013 & #1125), which has been elected Best Story of the Year every time it has been published in Sweden (reprinted in 1986, 1991 and 1999). Lee Falk himself vowed never to write any other story about Devil's origin after having read it. Other stories by Avenell that touched the readers in the same way and were elected Best Story in Sweden include:

In the same year that he joined Team Fantomen, Donne began to work with Spanish artist Enric Badia Romero on the newspaper strip Axa, commissioned by the British newspaper The Sun. Romero had previously worked on Modesty Blaise from 1970 to 1978. British newspaper strips have a tradition of allowing more nudity and adult content than American ones, and Axa was definitely part of that tradition. The main character was a young woman who lived in a post-apocalyptic future where she fought the oppressive rulers, usually with very little clothing and occasionally with none at all! Click HERE and HERE for a couple more samples of Axa in action (nudity warning)! The Sun cancelled the strip mid-story in 1986, after which Romero returned to Modesty Blaise. The entire run of Axa has been reprinted by Ken Pierce Books.

Among Donne's more unusual credits is the official comic book adaption of the wedding between Prince Charles and Diana in 1981. Donne however chose to use a pseudonym for that work, where he cooperated with another ex-Modesty Blaise artist, John Burns. Avenell & Burns also collaborated on the strip Eartha for the Sunday paper News of the World in the early 1980s. He also wrote a one-shot album starring Semic's latin american hero Tumac in 1981.

In the mid 1980s, Donne created the strip Django & Angel for the Swedish Agent X9 magazine. The strip was sometimes simply called Django as the character Angel was more or less replaced by Django's girlfriend, the beautiful topless dancer Monique. The main artist was Florenci Clavé, and the strip was reprinted in the United States: a five issue limited series was published in 1990 by Caliber Press in association with Semic Press. Django was published in Agent X9 from 1986 to 1993. 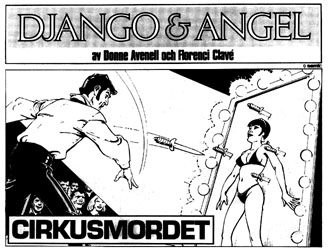 Donne Avenell also wrote an impressive number of Disney stories for the Danish publisher Egmont. Between 1980 and 1994 he wrote well over 200 episodes featuring the well-known characters Donald Duck, Uncle Scrooge, Goofy etc. These stories have since been reprinted in dozens of magazines all over the world. A complete index of Donne Avenell's Disney comics can be found on the Inducks Website.

Donne Avenell was a master of emotional content, and has often been described as a natural when it came to writing. He based his work on Charles Dickens' formula "Make them laugh, make them cry, make them wait!" and his Phantom stories spellbound a generation of Phantom fans in Scandinavia. Unlike many Phantom writers, Donne preferred stories set in current time. Historic adventures require a lot of research, and Donne liked to be able to just start writing as soon as he had an idea for a story. He gladly let his friend Norman Worker take care of the "sword-fighting" stories for the most part.

It was typical for Donne to focus more on the characters and their emotions instead of events. With this character's reactions in different situations in mind, he would prepare a synopsis and send it to the editors. After approval, he would go to work on the script, always writing completely by hand before sitting down in front of the typewriter. He often listened to music while creating stories, and enjoyed going to the opera and working on Phantom stories in his mind.

Donne Avenell suffered from a heart condition for many years, but remained active until the very end in 1997. "I will write until I die by the typewriter", he said in a 1986 interview, and that he did. The Mysterious Skull Cave (F566, Fantomen 10/1997, Frew #1176) was the last Phantom story he wrote before he passed away. His last published story was The Devil's Anvil (F577, Fantomen 21/1997, Frew #1189), although Donne had actually written it before The Mysterious Skull Cave. Donne Avenell wrote a total of 69 Phantom stories during his 20 years with Semic/Egmont; about half of these stories have never been published by Frew in Australia. As a posthumous tribute, his story The Shipwreckers' Town was adapted into a Sunday story by Claes Reimerthi when Egmont began to supply scripts for the newspaper version of the Phantom in 2000. 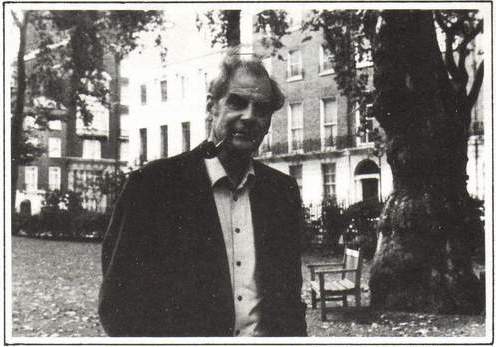